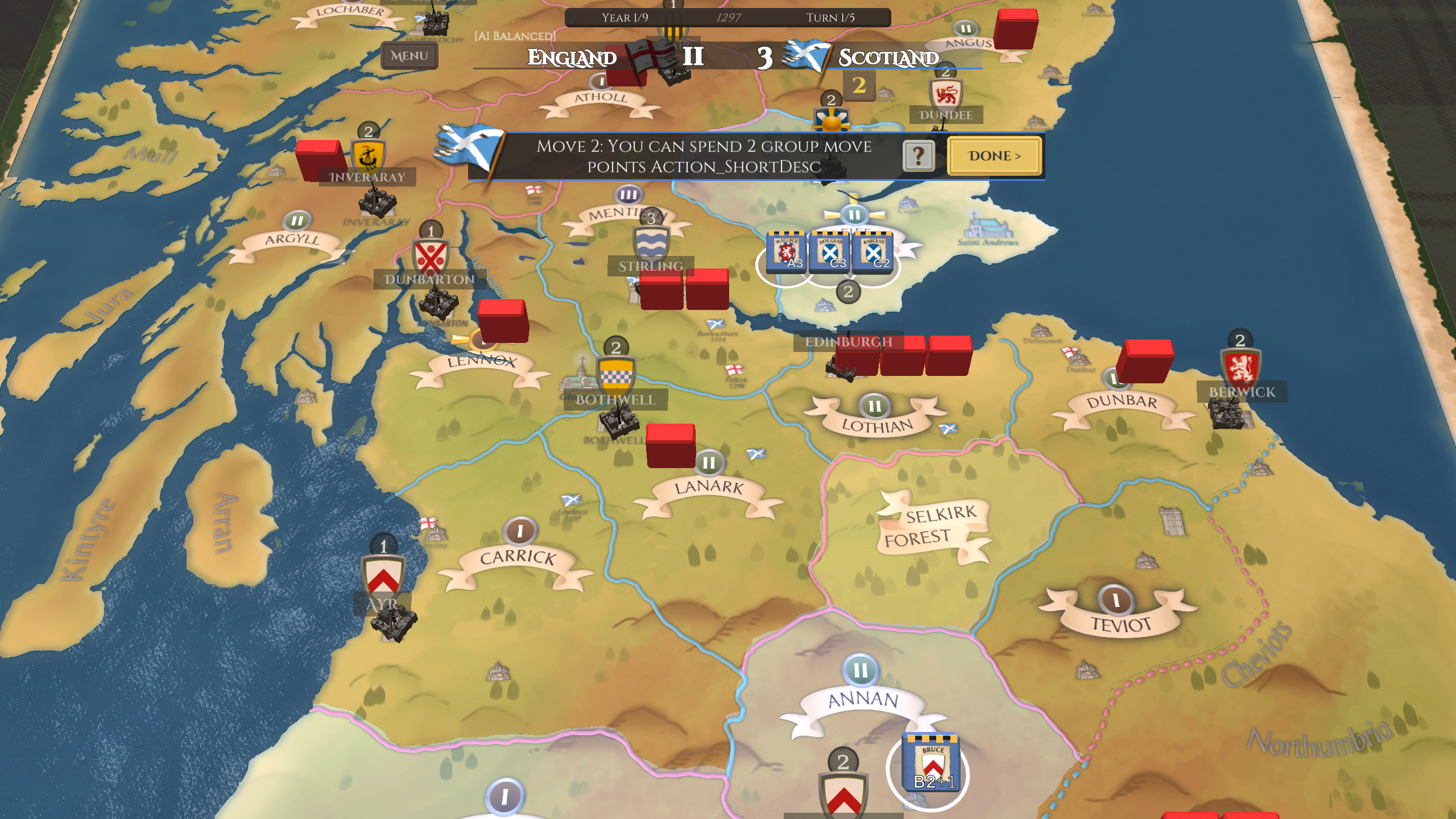 Avalon Digital has been busy pumping out digital adaptation of board games for the wargame variety. I can still remember how excited I was when they released Richard III on Steam which portrayed the 15th century, a bloody dynastic struggle between the royal houses of Lancaster and York for the throne of England.

It was the first time they released an accurate recreation of the board game series. Now, their third instalment in the series, Hammer of the Scots, plunges you into the war of Scottish rebellion against the English of the late 13th century.

If you have watched Braveheart, then this is essentially the wargame of it. There are a total of 3 different campaigns covering different turning points of the war. One of them being the full campaign while the others are focused on brief periods of the conflict.

Assuming you are not familiar with other Blocks! titles, essentially you are given “blocks” to move around the map and to decide where and when battles will take place across the land. Each year is made out of several turns. And at the end of the year, winter will roll in, forcing you and your enemy to hunker down like the frail humans we are.

It’s during this period that some of your hero units like Wallace himself will have to head back to their hearth in their respective hometowns to rest and regenerate their health—ultimately getting ready for the battle coming next year. This is the cycle of gameplay you can expect from other instalments in this series.

Your units only recover during wintertime, and not all of them will gain full health. This part and as some of the other game mechanics are not very well explained, which left me scratching my head, wondering why only some of my blocks were regaining their health while others were not.

Sadly, one of the biggest gripes I have with this game is the lack of tutorials and missing text on half of them. There is enough text missing from “hints” in the game that makes it difficult for me to learn the gameplay without using trial and error method. It’s somewhat frustrating.

Maybe if you are already familiar with the series from the traditional board game variants, then this would not be a problem. However, for most computer wargame enthusiasts who have not played the board game version will have a harder time grasping its mechanics.

The AI this time around has also shown to be subpar at times. Often congregating their forces in a single province without taking advantage of their numbers and overwhelming nearby key areas that were barely held by my units. Sometimes when they do strike, it’s often to my advantage instead of theirs.

This is not to say that the AI is dumb enough that it won’t give you a challenging time playing. It will keep you occupied if you are playing as the Scots since the odds are always stacked up against you. And you will also find that managing your troops in the following years in the campaign to be tricky.

I have to admit that finally being able to play Wallace in Hammer of the Scots feels liberating in its own right as you are playing as a rebel faction against established authority. Not often, does this happen in wargames. More likely, you will be the one stomping your foot on scummy rebels! And it’s refreshing.

It’s too bad this game was rushed and did slip through quality assurance in Avalon Digital. However, I do hope more wargame publishers would take their time to polish their games, even though I do appreciate the higher amount of wargames coming out in recent years. It would be nice to see this franchise bloom deservingly.

You can watch a short gameplay video I created below. Feel free to subscribe to my YouTube channel as well.